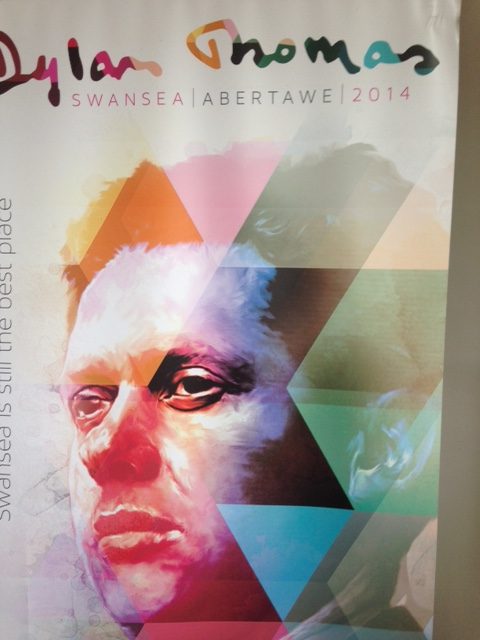 While on holiday on the Gower Peninsula, we dipped into Swansea to visit the Dylan Thomas Centre, a museum and arts centre dedicated to Swansea’s most famous son.

Love the Words is the title of the exhibition dedicated to his life and works. It’s surprisingly inventive, interactive and informative.

I learnt about his early life in Swansea.

The name Dylan was quite unusual when Thomas was born in 1914. It means ‘son of the sea’ and derives from the Mabinogion, medieval Welsh folk stories that were first put in writing in the thirteenth century.

Bob Dylan, Dylan from Magic Roundabout and most of the subsequent Dylans that you meet in all walks of life have had their name popularised by Thomas’s influence.

Another startling fact is that Dylan was largely a failure at Swansea Grammar School, even though his father taught there.

He also kept notebooks from an early age, containing observations about life in Swansea, a city he later described as an “ugly, lovely town”.

These notebooks served as a rich source of inspiration all his life. He continued to refer back to them throughout his life, using them to rekindle early memories in his later writing.

Dylan lived in London in the thirties and soon established himself as a leading poet. During this time he met and mixed with leading artistic figures.

In the exhibition we learnt that he met Picasso. He attended an artistic gathering that celebrated the emerging absurdist movement. Dylan was impressed by Salvador Dali’s famous Lobster Telephone. Apparently the Spanish artist almost died when he experienced breathing problems whilst making a presentation in a deep sea diving suit.

Through the famous artist Augustus John, Dylan met and soon married Caitlin McNamara. It was an alcohol-fuelled relationship, littered with infidelity. Even so, the relationship lasted.

The couple were constantly beset with financial problems and sold everything before moving to the Welsh fishing village of Laugharne.

During his life Thomas established his reputation as a leading poet and writer. Yet it was only through touring the US after the War that he was able to stabilise his finances.

Unfortunately, other aspects of his life remained turbulent. He died after a famous drinking spree in New York’s Chelsea Hotel in 1953. He was just 39 years old.

Although he died almost 65 years ago, Thomas’s cultural influence continues to reverberate across the English-speaking world.

The prominence and interplay of words in his work creates strong and vivid imagery for readers. Thomas’s writing also connects with a huge number of people because of his ability to use simple language everyone can understand….and that’s something we can all learn from.